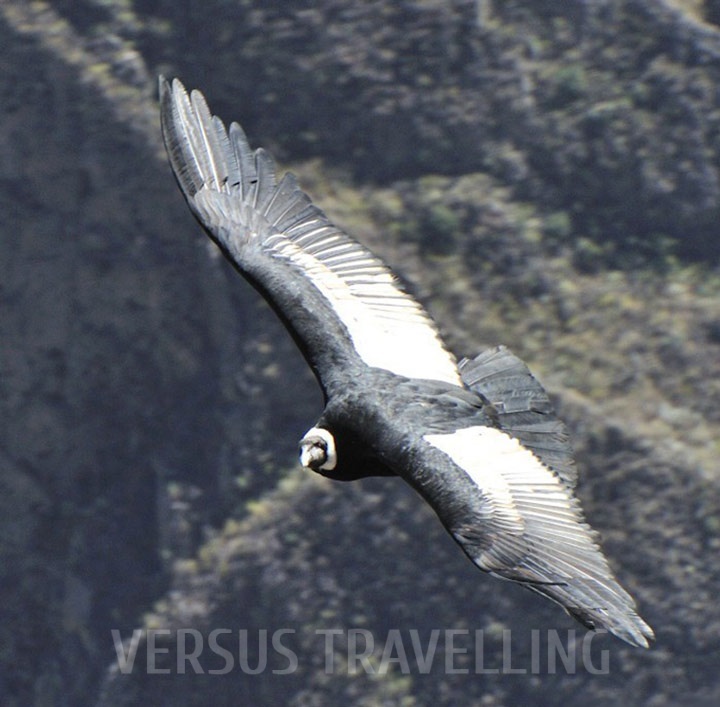 The name of this bird, the Andean Condor, comes from its habitat – the Andes mountain range on the west coast of South America. 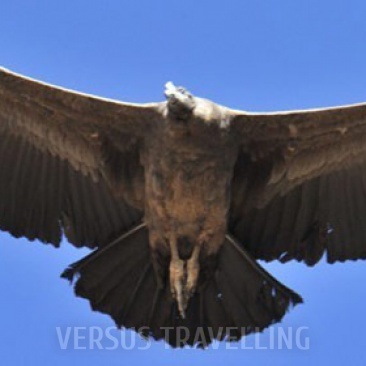 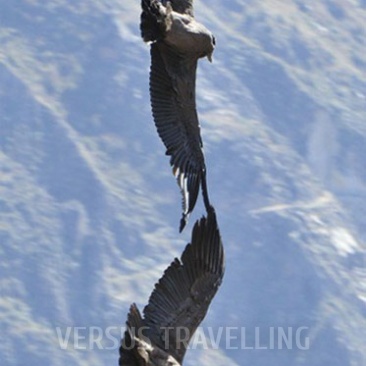 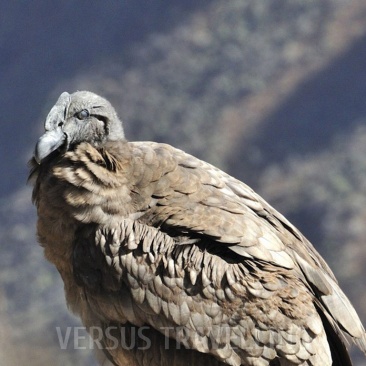 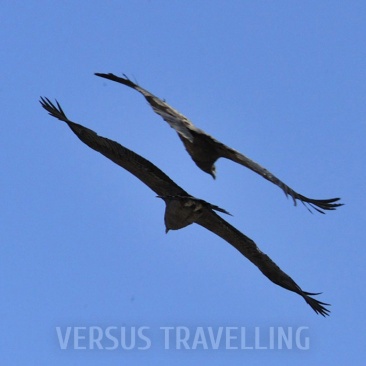 The name of this bird, the Andean Condor, comes from its habitat – the Andes mountain range on the west coast of South America. The Andean Condors live in the open plateaus, sometimes they can be found on the plains. The northern border of its habitat goes through Venezuela and Colombia, but therethe bird is very rare. The southern bordercovers mountainous regions of Ecuador, Peru, Chile, Bolivia and western Argentina.

The condor wingspan can exceed three meters. The weight of an adult condor reaches 15 kg, female weighs 8–11 kg. The appearance of the bird is largely determined by the fact that it is a vulture and a scavenger. The bird has a ruff of white feathers surrounding the base of the neck and, especially in the male, large white patches on the wings. The head and neck are nearly featherless, and are of dull red color, which may turn yellow during mating season. In the male there is a wattle on the neck and a large, dark red comb or caruncle on the crown of the head. Its beak has the form of a hook and is very convenient in cutting prey. The claws on the legs are straight and not sharp, thatdoes not allow the bird to carry its prey fromone place to another one. Its sight is exceptionally sharp. The bird, like other American vultures, catches uplifting flow of the air and for hours can hover in the sky, looking for food. Beside carrionthey can also feed on bird eggs and nestlings, and sometimes attack weakened or newborn animals. The condor can stay without food for several days, thenit makes a feast and takes off with great difficulty. It is considered to be the heaviest flying bird.

Condors are able to reproduce when they are six. Couples usually stay for life. Sometimes birds build their nest of a few sticks placed around eggs, in other cases the female sometimes lays eggs on a mountain slope. It deposits one or two bluish-white eggs, and both parents incubate them for two months. Chicks are fed from the beak with half-digested food, until they learn to fly.

The Andean condor is the largest bird of the family of American vultures. It is the only modern representative of monotypic genus Vultur, being the closest relative to California condor. Similar species include common buzzard or owl, Steller's sea eagle, Griffon Vulture and Golden eagle. The Andean condor was first described in 1758 by renowned biologist Carl Linnaeus, who called it Vultur gryphus, the name being used in scientific literature up to now.

The Andean Condor is a national symbol of such Latin American countries as Argentina, Bolivia, Chile, Colombia, Ecuador and Peru. It plays an important role in the culture of the peoples of the Andes. In the XX century the population of these birds was decreased significantly, and at present the Andean Condor is considered near threatened by the IUCN.

THE ANDEAN CONDOR IN HERALDY

THE ANDEAN CONDOR IN MYTHOLOGY

In the mythology of Native American tribes the Andean Condor was associated with the sun. The peoples of the Andes considered it a symbol of health, attributing healing properties to the bones and organs of the bird.

THE ANDEAN CONDOR IN FICTION

Jules Verne's "Children of Captain Grant" has an episode in which the giant condor attacks little boy Robert and lifts it high above the ground. As it was said before, the condor has actually short and straight claws, therefore it is not capable to carry its prey from one place to another.

Condor is presenton the so-called geoglyphs of Nazca, a group of giant images on the Nazca plato in Southern Peru (a UNESCO World Heritage Site). There are also rock paintings of condors made 2.5 thousand years before our era. The Inca used to observe dark areas of Milky Way. The Andean cultures include such terms as Lama, Lama’s Cub, Shepherd, Partridge, Toad, Snake, Fox and also Condor. The image of the Andean condor in different time can be found on the stamps of Ecuador, Argentina, Peru, Bolivia, Chile, Colombia and Venezuela, as well as on banknotes and coins of Colombia and Chile. In due time"The Flight of the Condor" music composition written by composer Daniel Aloma Robles was very popular. It accompanies musical play about the conflict between Indian tribes and European colonialists of America. The Condor was a symbol of freedom and world famouse melody was recognized as a national treasure of the Peruvian people in 2004. There is a video on the internet containing a hilarious chase for condor on ice field. The female condor nicknamed Queen Victoria, the mascot of "Bakersfield Condors" California hockey team, was supposed to open the match of the Hockey League. However, during the anthem the condor escaped its keeper and started running on ice. The man ran after the bird, trying to catch it, had a slide on ice and fell, and the bird finally reached sub’s bench and suddenly attacked the head coach. Eventually the bird was caught. Commentators had a good hearty laugh, and the anthem singersdid their best to restrain from laughing while singing.