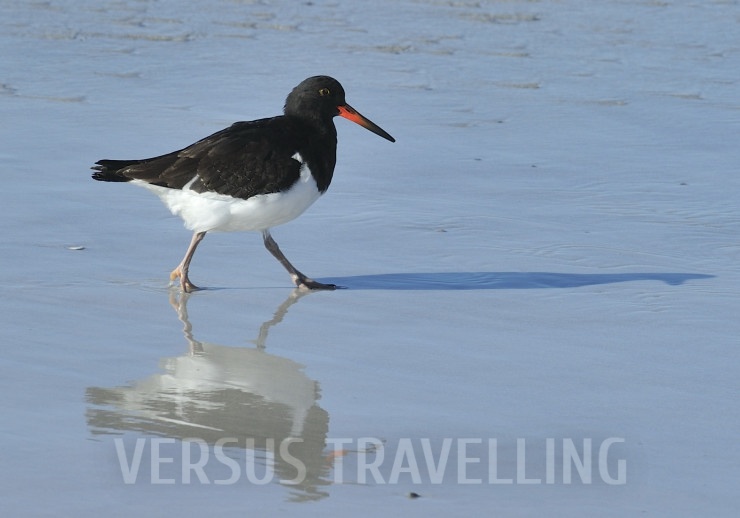 The Oystercatchers are a group of waders forming the family Haematopodidae, which has a single genus Haematopus. There are 12 species of oystercatchers, including one species extinct in the XX century.

Oystercatcher is a rather large bird with a long orange bill, which is robust, laterally compressed and strongly flattened. It’s bill is a perfect tool for opening bivalve mollusks, which is the major prey of these large shorebirds. Legs and eyes are orange too. The plumage on the head, back and tail is black, and its belly is white. Due to the black-and-white coloration it resembles a magpie. The distinctive feature of this bird coloring is a white spot on the shoulder blades, the so-called "wedge".

The bird flies and runsvery fast, swims well, catches shells and small fish in the water. Oystercatcher avoids wetlands and wooded shores, rivers with narrow and deeply incised valleys. They are found on coasts worldwide in Western Europe, central regions of Eurasia, Kamchatka, China and in the west of Korean peninsula. This bird feeds on insects, molluscs and crustaceans, catches small fish in the water. It builds the nest in the sand and pebbles on the coast of large inland water reservoirs.Usually it is just a scrape in the ground, covered with a few grass-blades or occasionally small seashells. Oystercatcher usually lays 2-4 eggs, and incubation is shared by both parents. They have to be alert all the time, because the nests of these birds can be easily ruined by seagulls or crows. Parents keep the defense about one and a half months, constantly spending the night in the nest. When the chicks grow up, they become good swimmers, and, if necessary, good divers.

Oystercatcher is a bird of passage. They inhabit the center and the south of the European part of Russia, Western and partly central Siberia. They spend winter on the coasts of the Red Sea, Persian Gulf, India, East Africa and the Mediterranean.

Mainland and the Far Eastern subspecies of Oystercatcher are listed as endangered in the Red Book of Russia. Oystercatcher is recognized as the national bird of the Faroe Islands.

The bird has become the main character of many Assyrian, Nenets, Chukchi, Khanty and Mansifairy tales. The most famous Russian proverb says: "every bird (the wader) likes its own nest".