Penguins are large birds. King Penguin (Aptenodytes patagonica) is no exception. It is about one meter high, and the average weight of adult birds is about 12 kg. At present there are 15-18 different species of penguins on the earth. King Penguin is very similar to an Emperor penguin (no wonder they have similar names), but slightly smaller in size and it has brightercoloring. The bird has a white breast, black head, silvery grayback and legs, and orange spots on the sides of the head and throat.
Penguins have small feathers which overlap each other. Feathers are short and they are closely attached to the body, making it streamlined, therefore penguins are excellent swimmers. They swim at a speed up to 27 km/h, helping themselves with wings-flippers, and can dive 10-20 meters deep and stay under the sea for up to 10 minutes. Under the skin of penguin there is a fat layer which protects it during a snow storm. The feathers do not warm the bird and it has only some small fuzz at the root of its feathers. Like all penguins it is flightless.
Penguins feed on fish, cephalopods and crustaceans. They live in colonies. Chicks appear in summer once every year and a half. King penguins do not build nests. They carry and warm up their only egg just in their feet, covering it by a pouch formed from the abdominal skin.The chick is incubated solely by male. When baby hatches, nurturing father feeds it on milk. Yes, yes! Bird's milk is a special juice which is produced by the esophagus of the penguin. It contains approximately 8 times more fat than cow’s milk. While father nurses egg and then a chick, the female moves a few kilometers to the ocean, forages fish, squid and crustaceans near the shore, and then bringsfood in its stomach, as in the shopping bag.Newly hatched chick moves to its mother which feeds it for 2 or 3 weeks by regurgitating half-digested food. Penguinheroic fathers, having got hungry during the absence of females and lost up to 40% of their weight during the watchful guard over their offspring, are sent to forage. Penguins mainly incubate chicks which hatched from eggs laid in November and December. The rest do not have time to grow up and die in winter. Those birds, whose chicks died lay eggs earlier next year. Penguin chicks differ from their parents, they are brown and fluffy. 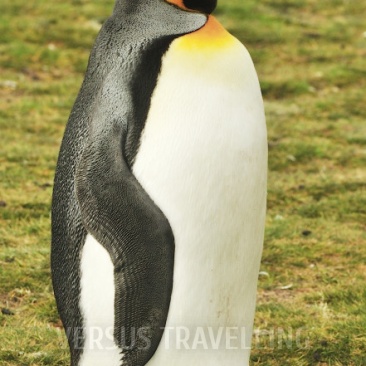 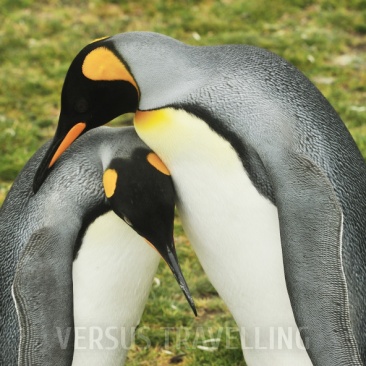 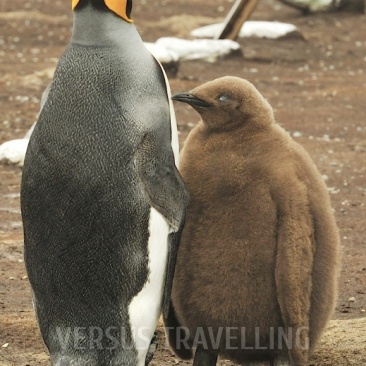 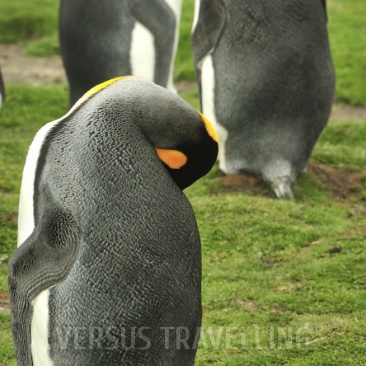 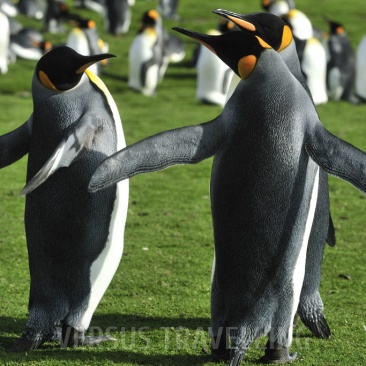 King penguins breed on islands along the coast of Antarctica, not excluding the Kerguelen, Macquarie Island and the Falkland Islands. The largest colony of these penguins is found on the southern coast of Chile and Argentina.

The Soviet-Japanese three-part cartoon film “The Adventures of Lolo the Penguin" won great sympathy by viewers in its time as recent famous cartoon film "Madagascar" with a group of penguins, released not long ago.

The premiere of the animated film "Happy Feet"about the life of penguins in the Arctic, directed by George Miller, appeared in 2006. The film won the "Oscar" in the category of the "The Best Animated Feature". In 2011 it was followed by itssequel "HappyFeet 2".

"Surf's Up", a feature-length cartoon about penguins, directed by Brannon and Buck, appeared in 2007 and "Penguins" movie with Jim Carrey in 2011.

Raymond Priestley’s "The Antarctic Odyssey" describes the discoveries and the trials experienced by the Northern Expedition Party of British polar explorer Robert Scott (1911-1914).

Kinder Pinguiis a famous brand of a soft sponge cake and lots ofcream covered by crunchy chocolate. The cute penguins were the main characters of this brand TV commercial.

Many people may have heard stories about the king penguins of the Falkland Islands, which were so fascinated by the noise of aircraft or helicopter engines that allegedly raised their heads upand consequently fell down on their backs and could not right themselves. The story seemed to emerge after the military conflict between Britain and Argentinain 1982, and afterwardswas snowballed with details. Rumor spread about a new employment – to pick up penguins that fell over on the backs. Funny but it is said that in 2001 a group of British scientists, worried about the birds, made a special research in Antarctica to prove whether the birds really fell down at the noise the aircraft. Not a single case of falling was recorded.

In 2006 America faced a scandal about children's book about penguins. One of New York's libraries decided to exclude it from the list of recommended reading. The fact was that main characters of the book "And Tango Makes Three" were a pair of gay penguins. Naturally the book immediately found its opponents and supporters.