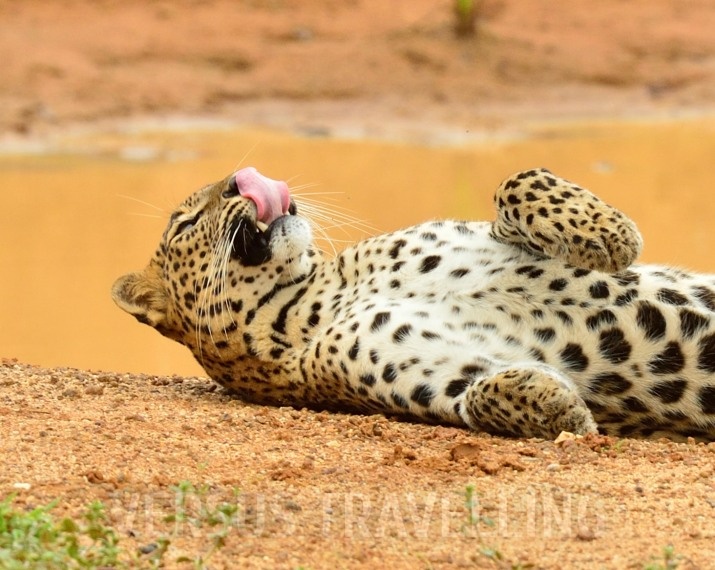 The leopard is the smallest of the four "big cats" in the genus Panthera. In antiquity, the leopard was believed to be a hybrid of a lion and a panther, as reflected in its name which is Greek compound of λέων leōn (lion) andπάρδος pardos (male panther).

The leopard is a very beautiful animal with an elongated, flexible, slender, and yet strong body (91–180 cm), round head, long tail (75–110 cm), and strong legs. Its weight averages 32–40 kg, sometimes up to 85 kg. Leopards have excellent hearing and eyesight but its sense of smell is weak.

Leopards inhabit most of Africa (except Sahara), the southern half of Asia, South-Eastern Europe. Recently, the leopard could be seen in the Caucasus, but now occasionally in the Transcaucasia, sometimes – in Central Asia, and more frequently in the Far-East of Russia. Leopard’s fur from tropical countries is rich, but not fluffy, and brightly colored. The African leopardshave smaller sport spots in comparison with the Asian ones. The color of Central-Asian leopards is sandy-gray, in the Far East- reddish-yellow.

The Far-East leopard has a furry winter coat, more thick, and pale. Bright, juicy colors dominate in the leopards of the tropical forests. Interestingly, the blackpanther is a melanistic leopard. Melanin is a substance that affects the color of the animal. Its excessive content, which occurred as a result of mutations, led to the emergence of a black panther. Leopards, which inhabit the forest, are the largest of its kind, those living in the open areas are smaller and lighter. Thesmallest one is Somali leopard. Despite the significant habitat, the number of leopards is small and they are in the IUCN Red List of Threatened Species. 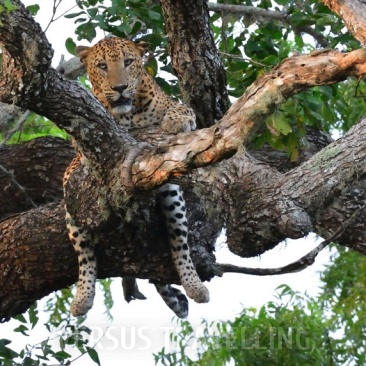 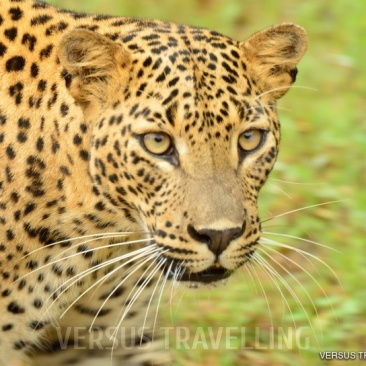 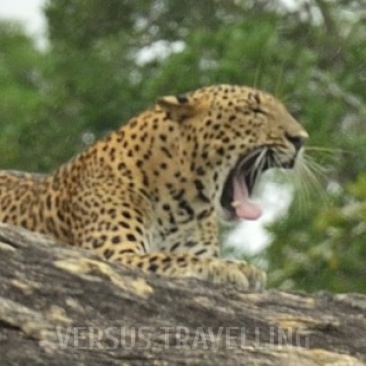 Sri Lanka offers a real chance to see this graceful, bright and extremely quick-witted cat, prone, like most members of this family, to a single way of life. The Yala National Park leopards are accustomed to cars with tourists and pay almost no attention to them. The predator can calmly pass by you, being only slightly distracted by your presence.

Leopard can be seen having a rest in a tree or on the ground. Because of its color, they match perfectly with the environment. In the bushes, even not far from the road, it is very difficult to notice a leopard lying in the grass.

Leopards are exceptionally adaptable. Populations thrive anywhere in the species range where grasslands, woodlands, and riverine forests remain largely undisturbed. It is well able to climb trees, staying there for a daily rest or in ambush. To better preserve their prey, leopards veryeasilypull it on the trees, although the weight can exceed 50-60 kg. But the ground is still their main hunting area. Leopard is inferior in strengthtotiger or a lion, but surpasses them in the ability to silently creep up on prey. Their main prey is small antelope, deer, roe deer and other hoofed animals. In difficult times, they can catch rodents, monkeys, birds, and even reptiles and insects.

Sri Lankan leopard (Panthera pardus kotiya) is a leopard subspecies native to Sri Lanka.It is very similar to the Indian leopard, but is smaller in size. The Sri Lankan leopard has a tawny or rusty yellow coat with dark spots and close-set rosettes. Malesaverage 124 lb (56 kg), the largest being 170 lb (77 kg), and females average 29 kg.

Once Sri Lanka leopards were numerous. Nowdays they can be seen only in a few places, such as in the Yala National Park in the south-east of Sri Lanka (about 40 leopards), which is the best place to watch the leopard in the wild. The WilpattuNational Park is also densely populated by leopards.Other populations are also observed in other parts of Sri Lanka.

Male leopardsexceed femalesby 30–40 percent. The gestation period of females is about 90-105 days, it gives birth up to 4 cubs at a time. Female settles somewhere in a small cave, where it keeps its cubs, because father-leopard can easily eat one of its own children.

Leopard feeds on the grass-eating animals of the island, such as: boar, deer, and monkeys. Since it is the dominant predator on the island, it does not need to pull the prey on to the tree.

Sri Lanka leopard is in the International Union for Conservation of Nature Red list of Threatened Species.

Leopards have been known to humans throughout history and have featured in the art, mythology, and folklore of many countries where they have historically occurred.

In ancient Egypt, the leopard was considered to be one of the incarnations of the god Seth; therefore the priests wore clothes made of leopard coat at funeral ceremonies to demonstrate their ability to protect the dead from its evil influence. For Egyptians leopard is the emblem of Osiris.

In the ancient world the leopard was a companion of the god Dionysus (in Roman mythology – Bacchus), as the creator and destroyer in one role, and in arts two leopards were often portrayed harnessed to the chariot. In Delos, Greece, a mosaic was found out with the image of god Dionysus riding a leopard. The spots on leopard coat were often associated with multiple eyes of Argus; therefore it was called the Guardian.

The negative meaning of the leopard in the Christian tradition is based on a symbolic vision of the terrible leopard by the prophet Daniel and his message: the Lord revealed to him that the villains can change their destiny no more than a leopard can change its spots. Hence, there is a link between a leopard and Satan, sin and lust. In Christianityit's the devil, sin, the second person of Satan - the Antichrist, and symbol of lust.

In Asia and Africa leopard coat was an attribute of shamans and sorcerers, and symbolized their superiority over the demonic power of the predator.

The symbol of leopard as a sacred animal was also used in Western European medieval epics and literature (the appearance of leopard in the prophetic dream of the main character of "Song of Roland", the vision of a leopard, a lion and a wolf in the first song "Hell" by Dante, etc.).

An Armenian myth tells of three twins,born on the sacred animals - leopard, lion and the dragon.

The panther is a symbol of malicein the Near East and North Africa.

In Sumer, the panther was a symbol of the goddess Inane, Cybele and Circe.

In ancient China, the panther was considered to be a very dangerous animal, its tail was set up on the battle wagons as a field mark. The Chinese leopard symbolizes courage, warlike ferocity.

For Maya Indiansthe panther was called "balam", which was also the title of priest-predictor.

The myths of the South American tribes describe leopard as the guardian of priests-shamans.

The leopard is a part of the emblem of the British military.

The leopard was a symbol of courage in European heraldry, as well as in China.

In heraldry leopard symbolizes courage, swiftness, activity. According to the symbolic meaning ofcoats of arms the most favorite animals in them are  lion and leopard. Their images differ in postures: if a lion steps on three legs, and itshead faces the viewer, it should be called a leopard.

In 1943, the film "The Leopard Man"and in 1946 "Tarzan and the Leopard Woman" was released in U.S. In both pictures the plot was based on the atrocities committed by the ferocious predator, which later turned out to be a matter of human hands.

The heroine of M. Kazakov’s film "The Visitof the Lady" Claire Tsahanosyan travels, accompanied by a leopard.

In 1979, the film studio "The Screen" produced the cartoon film "Home for the Leopard." This is a story of how Leopard, who was too lazy to build a house for himself and his family, decided to take it from the monkeys, for which he was taught a lesson by his friends.

As for feature films, the film «ЕруLeopard” by Luchino Visconti, shot in 1962, is very well known.Although thestory is about people, not animals.

In the city of Locarno (Switzerland) every August since 1946 there is a Film Festival, where movies are watched in the open, and the best films are awarded with "The Golden Leopard" for the first prize, "The Silver Leopard" forthe second prize."The Bronze Leopard" is awarded to the best actor and best actress.

Honore de Balzac’s "Love in the Wilderness." The story about asudden friendship between a man and a leopard.

Anne Mather’s "Leopard in the Snow." Leopard becomes a star in the key episode of the love story.

J. Nesbitt’s "The Leopard". A ruthless killer stalks his victims quietly, like a leopard, depriving them of life with refined cruelty.

Natalia Basovskaya’s "The Hundred Years War: The Leopard vs. Lily." It describes Anglo-French conflict in the history of Western Europe in the High Middle Ages.

Olga Larionov’s "Leopard from the Top of Kilimanjaro." Contemporary fiction.

Jim Corbett’s "Leopard of Rudraprayag." Memoirs of a famous hunter of man-eating leopard.

Rudyard Kipling’s "How the Leopard Got His Spots." Cheerful and kind fairy tale about animals.

Svyatoslav Sakharnov’s "Leopard in the Birdhouse." A tale about the leopard and the tortoise.

Since the 70's the famous designer of clothing and accessories Roberto Cavallihave been promoting leopard brand which is still popular.