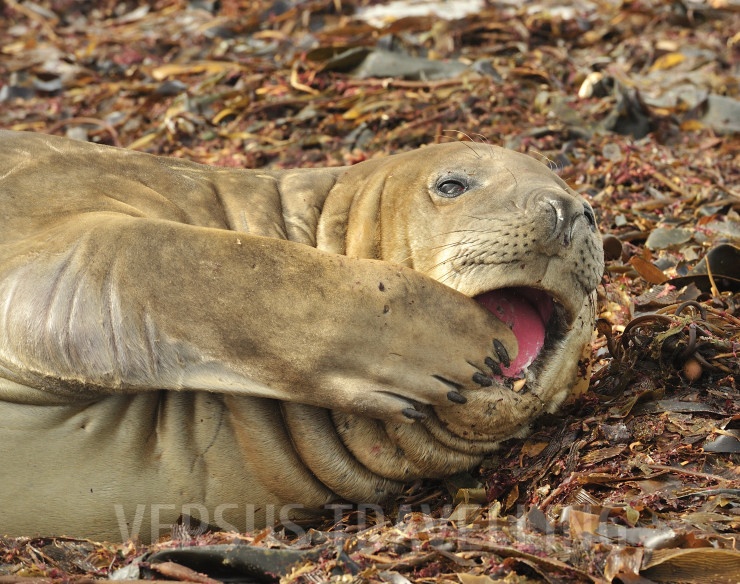 The southern elephant seal is one of the two extant species of elephant seals. It is both the largest pinpinned and member of the order Carnivora living today. It can weigh up to 5 tons. The body length of male is about 4-5 meters. 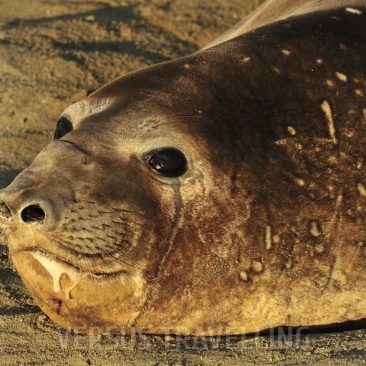 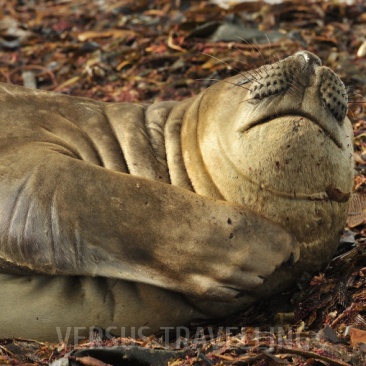 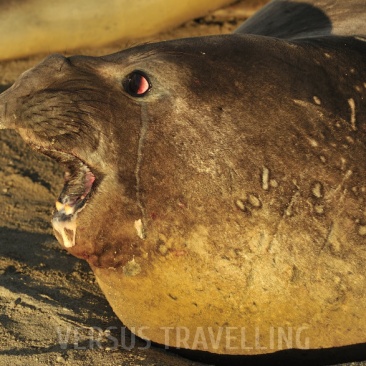 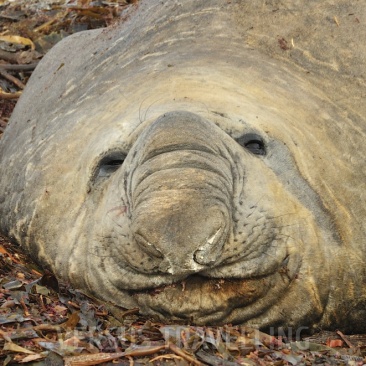 Southern elephant seal inhabits Antarctic and sub-Antarctic waters. It is distinguished from the northen elephant seal of the Northern Hemisphere by its greater body mass and a wider proboscis.

They are called elephant seals for their great mass and a large proboscis which is used to make extraordinary loud roaring noises when irritated or during mating season.

Its forelimbs are very short, and the body is of dark-brown color. It has practically no neck but several thick folds. Prominent dark, sparkling eyes make this animal very cute. The body of the elephant reminds velor cushion. Although in fact its skin is rough and wrinkled, covered with sparse, stiff and short fur. Molting is very painful for the nanimals.Old skin overswells, and then comes offin big patches. Nearly one month and a half the animal lieson the ground, unable to forsage.Thin and weakened after molting it leaves for the ocean, where it recovers quite quickly. Southern elephant seal can be away from the land for several days, which is easy for it, as it is an excellent swimmer and diver, being able to stay under water for 40 minutes.

Elephant seal feeds on cephalopods, clams, and fish. The layer of fat in its body works as an insulating cover. On the sides of elephant seal there are so-called blubbers on which skin is heated up to 29-34°C, while at the body the temperature is usually 18°C. There are totally 6 of such blubbers, 3 on each side. This is a natural mechanism of thermoregulation, which does not work in young animals.Unlike adults they can not independently change their body temperature and easily give up heat into environment. Due to this, ice melts under animals, and they find themselves in ice holes, from which they are unable to get outafter a long lying. Unfortunatelymany young seals die to this reason.

In summer southern elephant seals forage in Antarctica. At this time they can cover distances up to 5 km.

The animals breed on shore with males forming large harems of few hundred females. During formation of harems males frequently fight with each other.In the process they produce loud roar, straighten their proboscis and attack each other wounding opponent with their fangs.

Sothern elephant seals arrange their rookeries particularly in the Falkland, South Orkney and South Shetland Islands, where they spend an average of 6 months. Here pops are born, and females feed them with milk for a month.

It is most likely that some of you came across a picture on the internet, showing caracara bird cleaning the nose of an elephant seal by its beak, thus helping it get rid of parasites. The root of such a moving care lies not in altruism, but in mutual benefit, that allows elephant to be clean and quiet, and provides insects for bird’s dinner. The picture was taken near the Falkland Islands.