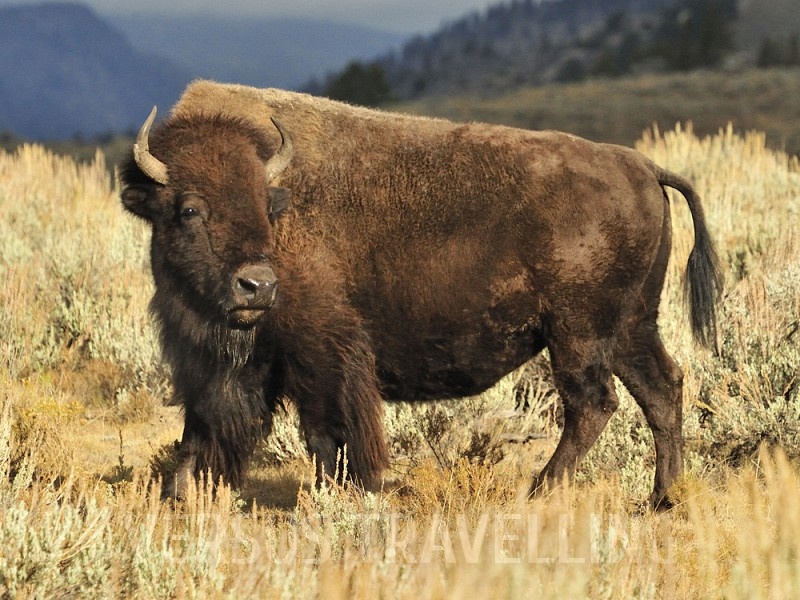 View American bison belongs to the genus bison, bulls subfamily and family Cavicorn. The American bison (Bison bison), also commonly known as the American buffalo, is a North American species of bison that once roamed the grasslands of North America in massive herds. The American bison is very closely related to the wisent or European bison.The cross-breeding of these animals was a success. The main distinguishing feature of bison is its high withers, which is in the area of ​​shoulders looks like a hump, low headand a wide forehead. Bison horns are short with curved ends inside.

The front part of its body has more hair; bison has a powerful head, neck and chest. Especially long hair grows on its shoulders, lower part of the neck and chin. The color of these animals varies from almost black to brown. White or light buffalo is very rare. The American Indians worshiped these sacred animals.

The extermination of the buffalo, fortunately, was not supported by all American citizens. In 1872, at the initiative of private organizations and individual enthusiasts Yellowstone National Park was opened. With a small herd settled on its territory, the restoration of the buffalo herd began in America.

Bison looks massive and slow, but it moves easily and is able to exceed the speed of a horse. Beside bison is a good swimmer.

They prefer to live in large herds. The herd has no permanent leaders, and during migration it is usually guided by a mature female. Old buffalo become irritable and look for privacy. In Yellowstone Park they can be seen detached from the herd, either wallowing or sleeping. Such singles can be quite aggressive. While traveling along forest trails to remote geysers one should pay attention to the big brown "stones" – single buffalo, which are difficult to notice in the woods and which can hurt an unexpected encounter.

Usually bison live in river valleys, and on prairies, plains and woodlands. They feed on warm grass, leaves, shoots, and lichens.

In winter, they can find their food, even if the snow is up one meter deep. They throw snow with hooves, and then dig holes, helping themselves with head and face. Bison also drink water or consume snow on a daily basis. Due to a well-developed sense of smell bison can sense a troubleat a distance of two miles, and it smells waterat seven or eight miles.

Bison is in the Red List of endangered species.

Cattle was an object of worship of the Stone Age people. Gigantic images of bison were discovered on the ceiling in the cave of Altamira (Pyrenees). Their size was more than two meters. The primitive paintings strike with their authenticity and artistic expression. Here bisons peacefully graze with a wounded predator lying nearby. These images were an the element of worshipping to the animal and were used in magic rituals. For the hunt to be successful first it was necessary to kill the animal, depicted on the wall of the cave, therefore cave paintings often have traces of arrowheads and spears.

Modern Indians still worship deer, llamas and bisons. Naturally, this has been reflected in a number of stories and legends about these animals. The American Indians consider bison as a symbol of supernatural power, strength and stamina.

There is an old indian legend of the Delaware tribe, according to which Indians called extinct mammoths as "big buffaloes."

In "The Myth of Creation" of the Sioux Indians the Great Spirit killed buffalo and ate them on top of Red Rocks. The blood of the killed buffaloes was flowing over the rock cliffs and reddened them.

The Apaches keep a myth about the origin of the buffalo, white sacred bison. White buffaloeswere usually sacrificed to the gods by Indians. Teton Dakota Indians bison considered buffalo as the saint of hunting, fertility, generosity, sex, skill, defender of girls and elderly. They believed in the master of bison who could come before people in the form of a big beast or a person. They worshipped bison to grant them good hunting. Buffalo’s skull was a symbol of magical power of the beast. For Omaha Indians buffalo’s coat was one of the four tribal relics. Teton Dakota tribehad a cult society of buffalo-people. During ritual dances they put on whole buffalo coat and danced imitating the movements of the animal.

Tale of Ojibwe Indians, "How Bisons Were Punished" tells the story that in ancient times the chief among all the animals was a bison, which did not have a hump yet. The hump ​was given to him as a punishment for racing across the prairie, when he trampled a bird sitting on a nest. Since that time all bulls not only have a hump on the neck, but keep their heads low in shame.

The Kiowa Indians have the following legend. Crafty and clever Sendeh learned that all buffalo had gone because the White Raven hid them in a cave. Sendeh cunningly penetrated there and let buffalo go, at the same time he became a burr and quietly left the cave, having stuck to the belly of one of the animals. This legend is very similar to the ancient Greek myth of Odysseus and one-eyed giant Polyphemus.

The American fairy tale "The mosquitoes, Bears and Bisons" tells about two brothers, liars, whose name was Dave and John. One of them tells the story of how at night a herd of bisons went by their house, each of which scratched against the corner of the house and thus slightly moved it from its place. As a result, when waking up in the morning, the story-tellercould not recognize the place around him, as the animals moved his house that far.

Buffalo in the Cinema

US film "The White Buffalo" starring Dustin Hoffman. It’s about two friends who decided to steal a rare 5-cent coin from a collector, which is called the "American Buffalo." But suddenly life makes changes into their plans, that leads to unpredictable consequences ...

US film "The White Bison". James Otis, who killed a peacemaker many years ago,battlingto end the hostility between the Americans and the Indians,met a huge white buffalo. Since then, in his dreams he sees a fight with the bison and each time wakes up in horror ...

The film "Where the Buffalo Roam." The debut biographical comedy by Art Linson.

The film "Tatanka". In the language of the Indians, this word means "buffalo". The hero is called like this after his victories in boxing matches.

"The Ghosts of the Buffalo, a collection of works by US writers dedicated to the era of the development of the American Wild West.

Ursula K. Le Guin's "Buffalo-babes, Go for a Walk...". In a plane crash a girl falls on a mountainside and meets a female coyote there. The story is about the unity of man and nature.

Louis Henri Bussenard’s "Adventures in the Land of the Buffalo." The story is about the adventures of two intrepid hunters.

Mayne Reid’s "The Boy Hunters, Or Adventures in Search of aWhite Buffalo." The novel is the first of trilogy of novels abot there boyhunters in the American prairies.