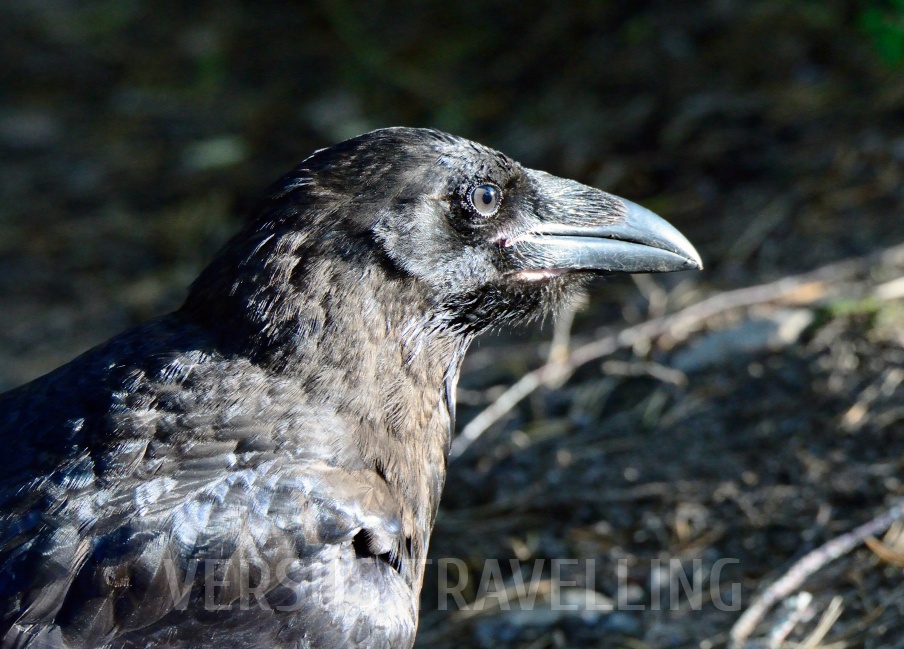 The Common Raven (Corvus corax), also known as the Northern Raven, is the lartgest of all corvids. It is three times the size of a crow, and its weight is three pounds.

Probably, it is necessary to remind that raven and crow are not male and female, but two different species.

The raven has a black plumage with a greenish tinge, strong and sharp beak, strong curved claws, and a wedge-shaped tail. The plumage of young birds is faded.

Due to its excellent sight it can trace its prey from above, either wounded or a dead animal. By loud kraa it attracts its mates. Common raven feeds mainly on carrion. Birds use human garbage as a source of food too, in the wild they can attack a chick, eat lizards, small rodents and insects. Raven can even deal with a hare!

Common raven begin to mate in February and March. Couples choose their territory, which serves as their food source during the breeding season, and aggressively defend it from other birds. They tend to nest together, arranging their nests on the trees, voltage poles, pipes or rocks as high as possible. Raven’s nest is large, about a meter in diameter, and resembles a bowl. The birds are enthisiastically involved in the construction of their nest.For about ten days they put thin twigs and grass into the frame, made of thick branches, and cover the bottom with dry leaves. Ravens usually lay from 3 to 8 pale bluish-green, brown-blotched eggs. Female incubates for three weeks, while male provides it with food. This goes on until late spring when chicks come into being. In about a month and a half they are already able to fly, and six months after birth they leave their parents and begin an independent life.

Common ravens can be very long-lived and reach 100 years in captivity. These birds are known for their intelligence which can be compared only with great apes. They can mimic sounds from their environment, including human speech.

Common ravens can be found almost everywhere, with the exception of only New Zealand and South America.

Common Raven is an ideal figure to serve as a symbol of death, grim prophecies, relations with the other world, and all sorts of fabulous transformations. Its deep black plumage, hoarse and dry noise kraa, the habit to feed on carrion, amazingly long life span... Definitely a negative character. Although there is still one awasome merit, its wisdom that is attributed to the bird because of its long life span.

It is believed that raven is a heraldic symbol, and symbolizes foresight and longevity. In German heraldry it is portrayed standing and ready for battle, with open beak and raised right claw or ready to take off, with raised wings and open beak. In Russian heraldry raven is very rare and is depicted with the body turned left and head turned in the opposite direction. "Slepowron" coat of arms is widely spread among Polish nobility, including more than 200 families. Similar picture can be seen on the coat of arms of some cities and regions.

In ancient mythology, the raven (or crow) accompanies gods and heroes: Cronus (Saturn in Latin), Apollo, Asclepius, and Athena, whose helmet is shaped like a crow. Ancient myth tells of how Medea rejuvenated oldJason. She gave him a decoction made from the liver of the long-lived deer and the head of the raven, which survived nine generations of humans. In ancient mythology, the constellation of the Raven is associated with the ancient Greek cult of Apollo For Slavs raven was a prototype of the wind, which brings the storm, as well as live and dead water. In fairy tales it can warn the hero of danger, help and even save him. In some Slavic tales it can appear as a king-raven, which sits in the nest, built on the oak tree. It is considered to be a prophetic bird. People have long believed that if raven flies to a house, it means a disaster, and a sudden invasion of a flock of ravens spells not only the sea of troubles, but also the invasion of enemies. It was believed that, if raven croaks before hunting, it will not be successfull, and if gun barrel is greases with raven’s blood, it will not miss the target. In many people's common thinking raven is associated with death. If it croaks over the house, sits on a roof or beats against the window, then someone is going to die. It is believed that raven in greams also profesies death. According to a known common Christian legend, the raven turned black whenit did not return to the Noah’s ark with a message about the end of the flood. As a punishment, the raven, who was once as white as snow and as gentle as a dove, has become a bloodthirsty, black bird, doomed to feed on carrion. In ancient times it was believed that the image of raven can be taken by a dying wizard and witch's house can be always identified by the fact that raven is sitting on her roof at night. In medieval Europe raven becomes the personification of hell and the devil, as opposed to a dove - the symbol of heaven, the Holy Spirit and the Christian faith. This principle is based on the Jewish tradition of the division of animals and birds into clean and unclean ones. In the Old Testament ravens brought food to the prophet Elijah in the desert, and the color of the hair of King Solomon in one song is compared withthat of the raven. In Hinduism, it is believed that dead people like their relatives offer food to ravens. They are often referred to in Buddhism, especially Tibetan disciplines. In Chinese mythology, the term "crow's beak" means that someone is cursed. In shamanic cultures of the Indians of North America the raven is endowed with a special power and is a cult hero. Chukchi thinks it is a patriarch of the family, from which all people came from.

Carlo Gozzi’s "The Raven" (a play). Edgar Allan Poe’s "The Raven." The poem is considered to be one of the most significant in the history of poetry. Charles de Lint’s "Some Place to Be flying".

The proverb "Crows do not pick crow’s eyes” has been known since ancient Rome. Theravens of the Tower of Londonare a group ofcaptiveCommon Ravenswhich live in theTower of London. There are a lot of legends about them. Ravens became importantduring the reign of Queen Elizabeth. She ordered her favorite the Duke of Essex to be put to prison for attempted rebellion. While he was expecting a sentence in prison cell, a raven beat with its beak against the window and shouted "Viva!" three times. A few days later the duke was brutally executed, and the legend about the raven which comes to all doomed to die in the scaffold, existed for several centuries until the Tower of the royal prison was turned into a museum. Another legend developed that the British Empire would not fall to a foreign invader so long as there were ravens at the Tower of London. In XVII century King Charles II issued a decree that there must be six black ravens in the castle. A special position of the keeper of these birds was even introduced. The tradition exists up to now: six black ravens (and two spare ones!) now live in the Tower of London in comfortable and spacious enclosures. The birds are under care of the Yeoman Warder Ravenmaster (also known as the Ravenmasterfor short), who looks after them, feed them, releases them from cells early in the morning and put them back in the evening. The government allocates about 100 pounds per month to keep them in the Tower.